We arrived early afternoon to set up the site for the muster.

Deniliquin had 40 mls of rain before we arrived and the entire site was flooded. Whilst there we had another 18ml.

On first inspection we wondered how we would set up with so much water everywhere, where we would sleep and if anyone would even bother turnin up to the muster when it was so wet.

After about three metres of sand delivered into the tent and spread out, we were able to lay down tarps to sleep on and set up part of the shop. Utes were moved into place. We dug trenches around the tent to help keep the water well away from the tent. 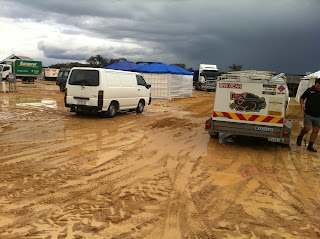 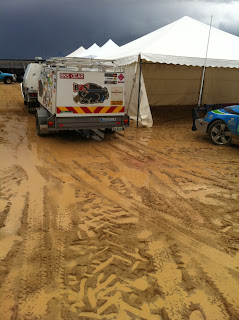 Kady was the first to slip over in the mud. Poor girl, her boot got stuck and she lost balance. She wasn't impressed to find there was no water in the shower blocks to wash away the mud. We all had a good laugh about it. 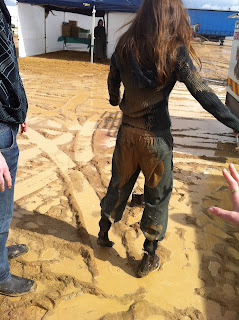 bahahaha... poor Kady... oh the mud... there were even people being towed in a tinnie behind a ute :) rofl

I really enjoyed your blog for the Deni Ute Muster, and was wondering if you'd like to feature it on a prominent Australian tourism site? I'm currently seeking different bloggers who went to regional events, and yours is just what I'm looking for! If you're at all interested, please email me at andrew.cook@twosocial.com and we can discuss this in more detail.